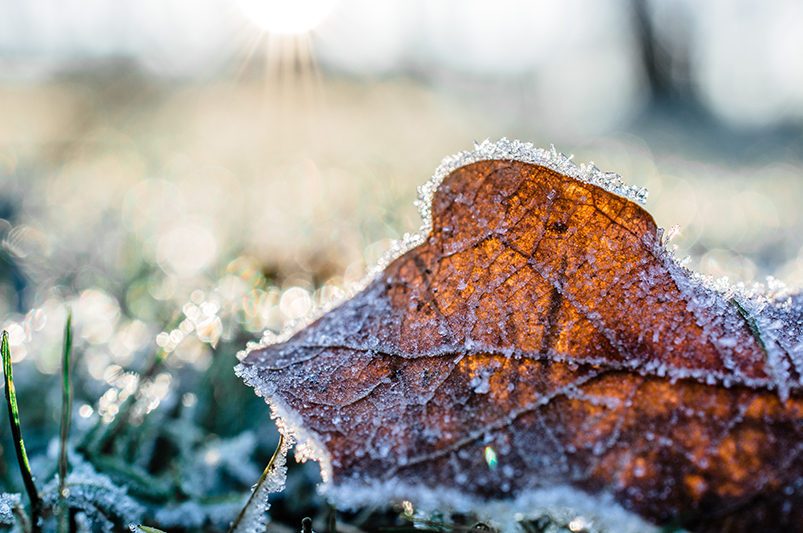 If have a beautiful and spacious garden full of all kinds of plants, trees and flowers, you surely know it can be difficult to protect them from nasty seasonal elements.

To have a beautiful garden all year round, it is not enough to water the plants when we observe they’re too dry, or to prune the branches and dry leaves when it is convenient; we need to carefully maintain them throughout all four seasons. The main enemy of all flowers and plants during the coldest months of the year? Frost.

During Fall and Winter is when more warnings of frost are registered, making it necessary to take protective measures to avoid the freezing of your flowers and plants. To help you fight the effects of frost on your garden, we will give you a series of essential tips that will help you protect all your plants and learn in depth what frost is and how it occurs.

What is Frost & How Does It Affect Plants?

Frost normally occurs during the coldest and clearest nights, since the absence of clouds and hardly any wind makes the coldest air settle closer to the ground, being therefore much closer to the skirts of our trees and resting on the flowers and leaves of all our plants. The colder it gets, the faster the vapor condenses in the air, which in turn settles on all the plants and ends up crystallizing. This gives rise to those little shiny ice pieces that we know as frost.

Frost by itself does not have to be something deadly, nor does it mean that all those plants exposed directly and unprotected to it will die. Everything depends on the type of plant and on how long it has been in a frozen state.

According to gardening experts, the plants that are most susceptible to this phenomenon are those that have just sprouted in spring, trees with fruit, perennial flowering plants and all those plants that grow in macerators instead of on the ground.

At Which Temperature Does Frost Occur?

The experts estimate that it is only necessary to be at a temperature slightly below zero for this phenomenon to occur, and it is common for frost warnings to occur when the night temperature is predicted to be between 36 and 32 degrees Fahrenheit.

What Are The Main Symptoms of Freezing Plants

It is important to know that the damage produced by frost will not always appear immediately, and it may take a few days before it becomes visible to us. The main symptoms you’ll observe include:

Tips to Protect Your Plants From Frost

Although it is not always possible to predict when a new frost is going to occur, carrying out a daily control of the temperature forecast during the time of greatest risk is always very useful to start preventing them. Fall and Winter are when night temperatures become more unpredictable and therefore, when we must be more attentive to apply the following safety measures.

Freshly planted flowers and shrubs, especially those growing in a pot, should be wrapped in double sacking throughout the winter months. Burlap has proven to be a really effective resource to keep it insulated from the cold no matter how low the temperatures get.

For those plants that are still in the seedbed or in an early stage, the most useful thing is to use glass or plastic domes that keep them totally isolated from outside temperatures.

Another resource to combat lighter frosts is to provide extra hydration to our plants, since that extra water we put in your soil and plant cells have the ability to retain heat and help prevent cooling. For this resource to be effective we must water it abundantly early in the day and let it absorb it little by little. Consider getting an automated drip irrigation system installed to help stay on top of the water schedule. Our sprinkler installation experts will be happy to help!

If you have flowers that are very sensitive to weather changes and you have the possibility of transporting them to another place during the frostier months, do so. Leaving them in an indoor place protected from weather changes outside and away from any artificial heat source will keep them healthy all Winter long.

Add a Layer Of Mulch

Just like people put a sweater or a blanket over themselves when they are cold, covering their plants with a layer of mulch will protect them from the cold. Add a thick layer of mulch from wood shavings, leaf mold, dried leaves or straw and place it in the soil of your plants to protect their roots from freezing.